The President came to El Paso

The President came to El Paso last week. He promised a wall and repeated his lies about the dangers that immigrants pose. With El Paso as the backdrop, he claimed that this city of immigrants was dangerous before a border fence was built here in 2008.

Beyond refuting his comments about border communities like ours (El Paso was one of the safest communities in the United States before the fence was built here), about walls saving lives (in fact, walls push desperate families to cross in ever more hostile terrain, ensuring greater suffering and death), and about immigrants (who commit crimes at a lower rate than those Americans born here), it’s worth thinking about how we got to this place. How it came to be that 11 million undocumented immigrants call America home, how we came to militarize our border, how we arrived at such a disconnect between our ideals, our values, the reality of our lives — and the policies and political rhetoric that govern immigration and border security.

I’ve come to the conclusion that the challenges we face are largely of our own design — a function of the unintended consequences of immigration policy and the rhetoric we’ve used to describe immigrants and the border. At almost every step of modern immigration policy and immigration politics, we have exacerbated underlying problems and made things worse. Sometimes with the best of intentions, sometimes with the most cynical exploitation of nativism and fear. Much of the history of immigration policy (and the source for the graphs that I’m using) is powerfully summarized in a report entitled “Unintended Consequences of U.S. Immigration Policy: Explaining the Post-1965 Surge from Latin America” by Douglas S Massey and Karen A. Pren.

In 1965, the U.S. ended the bracero farmworker program in part because of the substandard wages and conditions in which these Mexican workers labored. And yet, after decades of employing this labor, with our economy dependent on the laborers and the laborers dependent on access to the U.S. job market, the system of low-cost Mexican labor didn’t go away. Many of the same Mexican nationals returned to the U.S., returned to the same back-breaking jobs, only now they were undocumented. Ironically, despite the intent of the 1965 law ending the program, they enjoyed fewer protections and wage guarantees in the shadows as they continued to play a fundamental role in our economy. 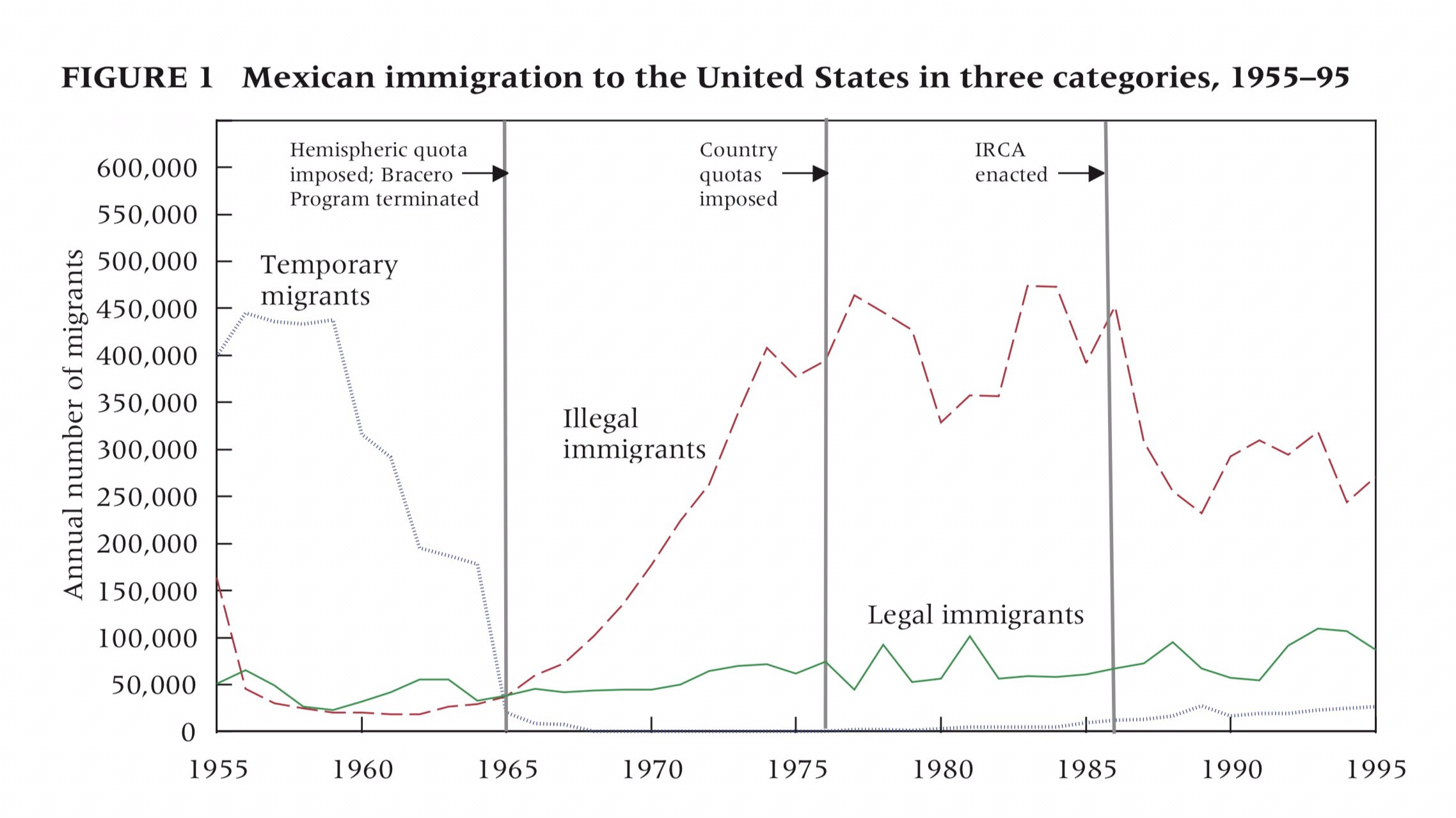 As this same population converted from being documented to undocumented a wave of scary metaphors was employed to gin up anxiety and paranoia and political will to employ ever more repressive policies to deter their entry. It was good for politicians and newspapers, terrible for immigrants and immigration policy. Thus began the “Latino threat” narrative. As Massey and Pren write:

“The most common negative framing depicted immigration as a “crisis” for the nation. Initially, marine metaphors were used to dramatize the crisis, with Latino immigration being labeled a “rising tide” or a “tidal wave” that was poised to “inundate” the United States and “drown” its culture while “flooding” American society with unwanted foreigners (Santa Ana 2002). Over time, marine metaphors increasingly gave way to martial imagery, with illegal immigration being depicted as an “invasion” in which “outgunned” Border Patrol agents sought to “hold the line” in a vain attempt to “defend” the border against “attacks” from “alien invaders” who launched “banzai charges” to overwhelm American defenses (Nevins 2001; Chavez 2008).”

Here’s why: as we made it harder for people to cross into the United States, we made it less likely that once here they would attempt to go back to their home country. Fearing an increasingly militarized border, circular patterns of migration became linear, with immigrants choosing to remain in the U.S., many of them ultimately joined by family members from their home country.

This government-created condition continued to feed on itself:

The “sustained, accelerating accumulation of anti-immigrant legislation and enforcement operations produced a massive increase in border apprehensions after the late 1970s when the underlying flow of migrants had actually leveled off. For any given number of undocumented entry attempts, more restrictive legislation and more stringent enforcement operations generate more apprehensions, which politicians and bureaucrats can then use to inflame public opinion, which leads to more conservatism and voter demands for even stricter laws and more enforcement operations, which generates more apprehensions, thus bringing the process full circle. In short, the rise of illegal migration, its framing as a threat to the nation, and the resulting conservative reaction set off a self-feeding chain reaction of enforcement that generated more apprehensions even though the flow of undocumented migrants had stabilized in the late 1970s and actually dropped during the late 1980s and early 1990s.”

This would only get worse. 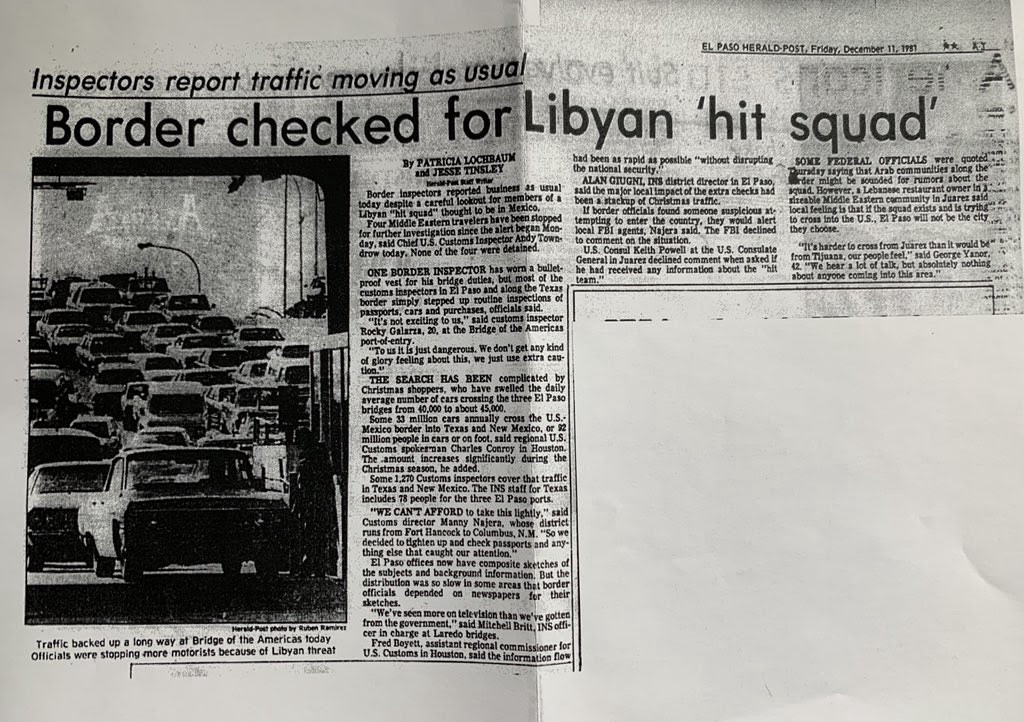 After terror attacks in the 1990s and in 2001, the Mexican immigrant was a ready scapegoat for politicians, and the intensity and brutality of enforcement and deterrence measures increased. In the face of terrorism that originated in Afghanistan and Saudi Arabia, the United States chose to conflate the war on terror with immigration from Mexico and Latin America.

With the passage of the Patriot Act in 2001 the number of deportations skyrocketed, with nearly 400,000 sent back to their country of origin in 2009 alone. Not one of the 9/11 terrorists entered through Mexico — and yet Mexicans bore the brunt of this country’s immigration response to the terror attacks. Last year, the State Department’s Bureau of Counterterrorism found that “there are no known international terrorist organizations operating in Mexico, no evidence that any terrorist group has targeted U.S. citizens in Mexican territory, and no credible information that any member of a terrorist group has traveled through Mexico to gain access to the United States.” This year’s report found much the same: “there was no credible evidence indicating that international terrorist groups have established bases in Mexico, worked with Mexican drug cartels, or sent operatives via Mexico into the United States.” 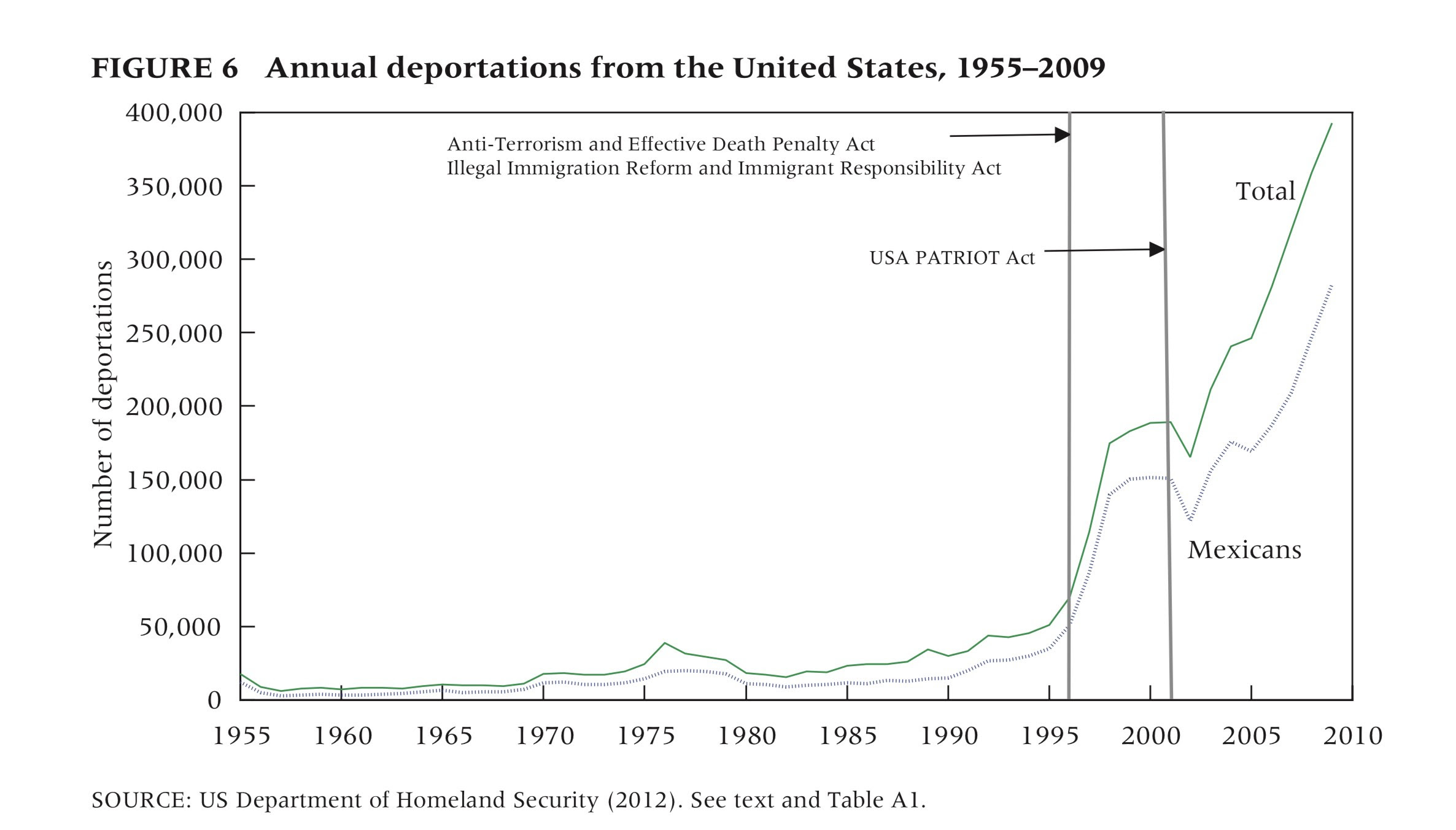 In addition, walls and fences authorized by the Secure Fence Act of 2006 pushed migration flows to ever more treacherous stretches of the U.S.-Mexico border. More than 4,500 human beings died crossing the border from 2006 to 2017. Far too many of them children.

In recent years, as Mexican migration slowed and then reversed (more Mexican nationals going south to Mexico than coming north to the United States), and as total undocumented immigration reached its lowest levels in modern history, the country was met with the challenge of tens of thousands of Central American families fleeing violence and brutality to petition for asylum in our country.

This too is an unintended consequence. Our involvement in the civil wars and domestic politics of Central American countries, in addition to our ability to consume more illegal drugs than any other country on the planet while leading a military- and law enforcement-first drug control policy, has helped to destroy the institutions of civil society necessary for those countries to function. They can no longer protect their citizens, and their citizens are coming to us.

And how do we meet this challenge? The President, using the same racist, inflammatory rhetoric of years past, seeks to build a wall, to take kids from their parents, to deploy the United States Army on American soil, to continue mass deportations and to end the protection for Dreamers. In other words, he seeks in one administration to repeat all the mistakes of the last half-century. And with past as prologue, we know exactly how that will end.

Not only will it lead to thousands of Americans losing their farms and ranches and homes through eminent domain to build a wall despite the fact that we have the lowest level of northbound apprehensions in my lifetime; it will lead to greater suffering and death for immigrants who are pushed to more dangerous points of crossing; it will fail to meet the legitimate challenge of illegal drugs that are brought to this country (the vast majority crossed at ports of entry); it will further erode our humanity and our standing in the world; and it will not do a single thing to reduce the number of undocumented immigrants and asylum seekers coming to this country.

We can decide that we’ll get past the lies and fear, focus on the facts and human lives in our midst, and do the right thing. The end goal is a stronger, safer, more successful country. Critical to achieving that goal is having immigration, security and bilateral policies that match reality and our values.

Last week, we welcomed the President to one of the safest cities in the United States. Safe not because of walls, and not in spite of the fact that we are a city of immigrants. Safe because we are a city of immigrants and because we treat each other with dignity and respect. A city that has the opportunity to lead on the most important issues before us, out of experience, out of compassion and out of a fierce determination to see this country live its ideals and rise to its full potential. 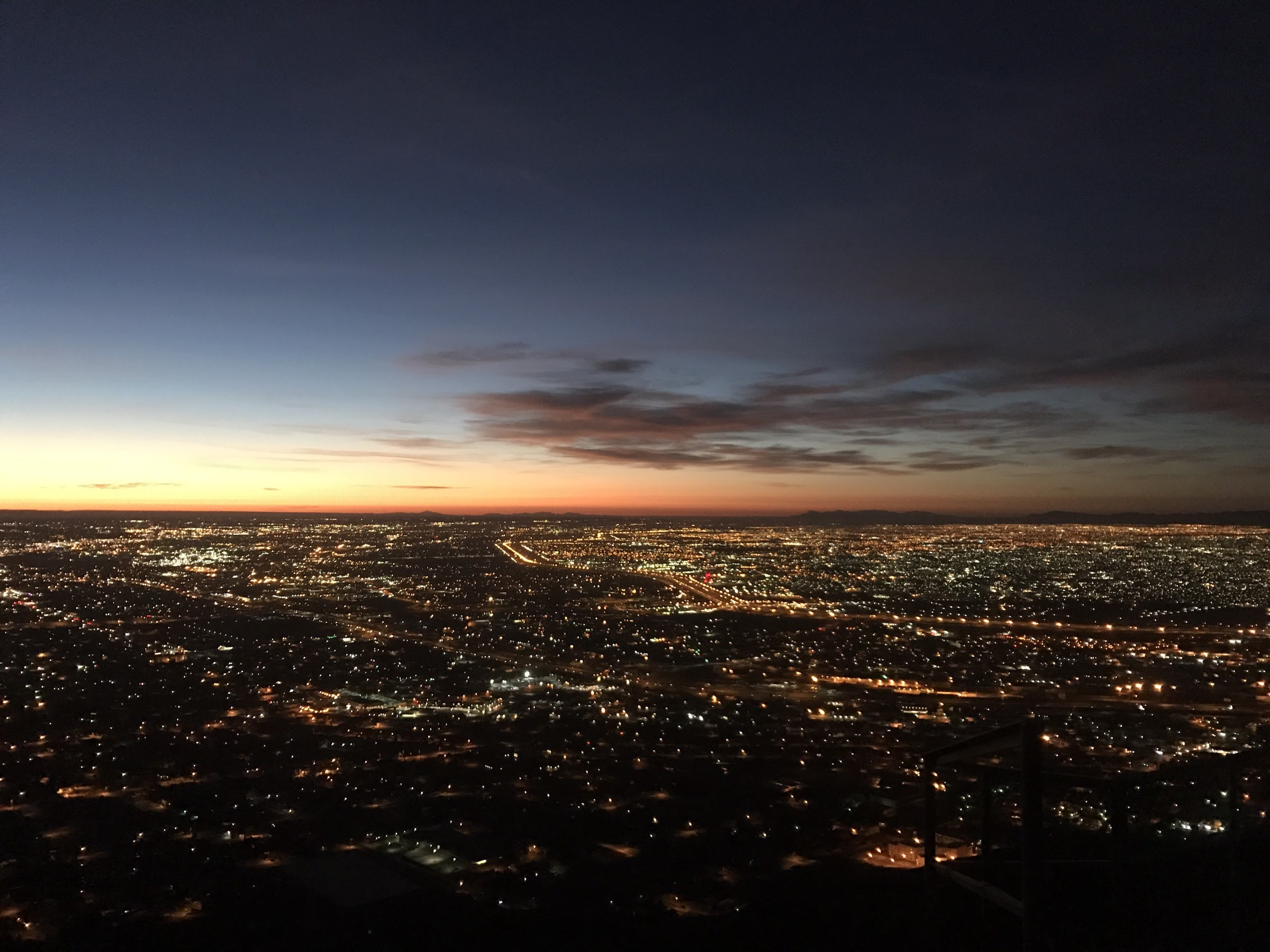 We can learn from the errors of our past, have the courage to do what’s right while we still have the chance, and ensure that the President doesn’t commit this country to making mistakes from which we may never recover.

One Reply to “The President came to El Paso”

Where you can discuss sensitive subjects.

Help us continue our mission of embarking down the path of answering the sensitive questions and providing products that reflect this journey.

You have successfully subscribed to the newsletter

There was an error while trying to send your request. Please try again.